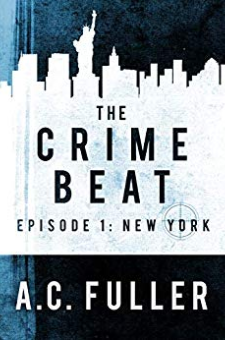 A brilliant reporter, haunted by her husband's death...A disgraced cop, tangled in a web of lies...Two unlikely heroes, brought together by one unthinkable crime in...The Crime Beat, Episode 1: New York CityPerched on the soft tar of a New York City rooftop, a mysterious sniper fires a single round from a fifty caliber rifle. Five stories below, his target collapses on the marble steps of the Metropolitan Museum of Art, dead.Crime reporter Jane Cole needs this story badly. Suspended NYPD cop Robert Warren is desperate to clear his name. They don't trust each other, but they make the perfect team. And as Cole and Warren track the killer, they uncover a plot so ruthless it shocks the conscience, a crime so expansive it will rock the world.Perfect for readers of Michael Connelly and fans of True Detective or Jack Ryan, The Crime Beat is your next bingeable series from bestselling author A.C. Fuller.Get Episode 1 now!The Crime Beat is a nine-episode novella series, designed to be read in order and in its entirety. Although each episode tells a complete portion of the story, the nine novellas--read together--weave one unforgettable tale.