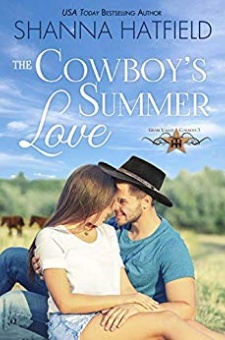 Wild and unpredictable, Travis doesn't want tied downUntil he encounters the girl who gives him roots...After six years in the service and two tours of duty in the middle of a war zone, Travis Thompson eagerly returns home to Grass Valley, ready to resume his life on the Triple T Ranch with his two older brothers. Ever the wild-child, Travis doesn’t disappoint as he rolls from one adventure to another in his quest to keep his adrenaline pumping. He needs a release for the tension constantly building inside him, especially after he discovers the girl he’s loved his entire life just moved back to Grass Valley.In love with Travis Thompson since she was old enough to notice boys, Tess Morgan can’t stay away from him no matter how hard she tries. Convinced Travis sees her only as his best friend’s sister, she wants him to realize she is the woman who could love him deeply and passionately.Will the two of them finally surrender to love? Anything is possible as summer spins its spell at the Triple T!Read all the books in the series! * The Cowboy's Christmas Plan - Trey Thompson just wanted a housekeeper and cook. He never planned on falling in love with Cadence Greer. She takes the job, right along with his heart. * The Cowboy's Spring Romance - Trent Thompson is confident, laid-back, and easy going except when he's around Lindsay Pierce. He's definitely met his match in the lovely school teacher. * The Cowboy's Summer Love - Travis Thompson has loved Tess Morgan as long as he can remember. When they both return home to Grass Valley, the pull of attraction to one another is so strong it's about to throw them off kilter. * The Cowboy's Autumn Fall - Brice Morgan thinks love at first sight is for idiots, at least until he meets Bailey Bishop and falls head over heels for the serious, career-minded girl. * The Cowboy's New Heart - Denni Thompson emphatically declares herself too old to love again. Then she meets hunky Hart Hammond and decides to give love a second chance. * The Cowboy's Last Goodbye - Since he assumes the plague would be more pleasurable to experience than the state of wedding bliss, Ben Morgan is more determined than ever to remain single. Right up until Harper Hayes steals his heart.Scroll up and grab your copy today!