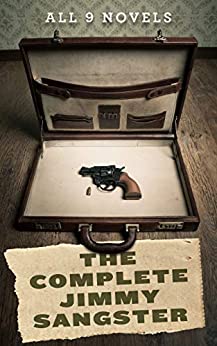 All nine books -- a wild, highly acclaimed collection of spy thrillers and crime novels -- by Jimmy Sangster, the legendary novelist and Hammer House of Horror screenwriter/director

THE SPY KILLER
Ex-British spy John Smith is nearly broke, has bad teeth, is lousy in bed, and drinks too much. But he's no fool...and underestimating him would be a fatal mistake. In this novel, he's tricked into going back into the spy game.

FOREIGN EXCHANGE
Ex-British spy John Smith is forced into a high-risk undercover operation on the other side of the Iron Curtain.

TOUCHFEATHER
It's 1970. Katy Touchfeather is a fun-loving, British spy with a cheeky attitude and lethal skills...and working undercover as a stewardess for an international airline. Katy is assigned to track down a scientist suspected of selling secrets to the Russians.

"Bubbly, irrepressible... drawn by her breezy, chatty first-person narrative, readers will cheer Katy on as she skates around with flamboyant grace." Publishers Weekly

TOUCHFEATHER, TOO
Katy's assignment is to bring down what appears to be a gold smuggling operation...but it's something far worse and much deadlier.

YOUR FRIENDLY NEIGHBORHOOD DEATH PEDDLER
Anthony Bridges is a hapless, over-sexed, unemployable Brit who stumbles into a career as an international arms dealer.

SNOWBALL
James Reed is an ex-Scotland Yard detective who became the bodyguard, then lover, then husband, then ex-husband of Hollywood superstar Katherine Long. Now he's a self-styled beach bum, living in the Malibu beachhouse he got in the divorce settlement, and making a half-assed effort at screenwriting. But then Katherine comes back into his life -- her rebellious, spoiled daughter Caroline is mired in the Hollywood celebrity drug scene. Katherine thinks James is the only one who can get his former step-daughter out before it beomes a scandal...or worse.

BLACKBALL
James is falsely accused of rape, chased by killers, and hired by a billionaire being blackmailed into marriage. And that's only the beginning of his troubles.

"This is a fast-moving, funny, sexy -- very sexy -- story. The conclusion is a shocker. Sangster is writing better than ever and James Reed is a very charming character." The Orlando Sentinel

HARDBALL
He's taking it easy when, to make some fast cash, he agrees to provide temporary lodging and security to a wealthy recluse recovering from an undisclosed illness. That simple job takes a wild turn into a nightmare of blackmail, drugs, and murder that could put James in prison... or a shallow grave.

"Excellently plotted and paced, this adventure offers the satisfaction of a hard-boiled L.A. detective story overlaid with the nuances of a British mystery.." Publishers Weekly

FIREBALL
Reed's first date with a woman he meets on a tennis court goes very, very bad, getting him beaten, accused of murder, and pursued by killers. And that's just in one night. Now he's trapped in nightmare of sex, blackmail and murder...and to get out, he must go to New York...and worm his way into the rotten core of the Big Apple.