The City of Veils 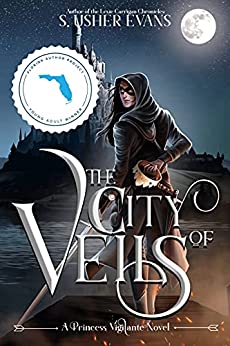 Winner of the 2019 Florida Author Project YA Book of the Year! From bestselling author S. Usher Evans comes a young adult fantasy series filled with masked mischief and mystery. Fans of Throne of Glass and The Kiss of Deception will get swept away in this brilliant series about a runaway-princess-turned-vigilante who must resume her royal duties when her father and brother are murdered.

Two dead royals.
A slimy crime boss.
A city on the brink of chaos.
Thirteen-year-old Princess Brynna fled an arranged marriage and became a masked vigilante. Now, at eighteen, she's on the cusp of taking down the city's most ruthless crime boss, Lord Beswick—that is, until her father and brother are murdered, and she's dragged back to a life she thought she left behind.

Even as she juggles council meetings and royal decrees, Brynna refuses to give up on her vigilante mission to bring Beswick to justice. But the politics of Forcadel are as volatile as its streets, and Brynna isn't sure whom she can trust in the castle. And with two royals dead in less than a month, she must use all her wits to keep herself from becoming the third.
Get swept away in a brand new world of intrigue, adventure, and masked mischief that Foreward Reviews calls, "entertaining from the first page to the last."