The Cecelia and Kate Novels 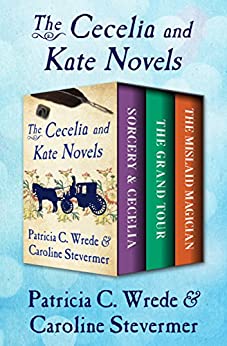 A trio of bewitching novels featuring devoted cousins who must juggle their magical powers with their duties as ladies in Regency-era England.

In Sorcery & Cecelia, the two cousins have been inseparable since girlhood. But in 1817, Kate goes to London to make her debut into English society, leaving Cecelia behind to fight boredom in her small country town. While visiting the Royal College of Wizards, Kate stumbles on a plot to destroy a beloved sorcerer—and only Cecelia can help her save him.

In The Grand Tour, Cecelia and Kate, along with their husbands, are inaugurating married life with a trip to the Continent. When a mysterious woman in Calais gives Cecelia a package intended for Kate’s mother-in-law, however, the two young wives realize they must spend their honeymoons preventing an emperor-in-exile named Napoleon from reclaiming the French crown.

In The Mislaid Magician, it is 1828 and the cousins are now society matrons. The steam engine is announcing its arrival and the shaking of the locomotives begins to disrupt England’s ancient, underground magical ley lines. When the disappearance of a foreign diplomat threatens to become an international incident, Cecelia departs to fight for the future of magic—leaving Kate to care for a gaggle of disobedient, spell-casting tots.

Blending history, romance, and magic, these charming novels from the author of the Enchanted Forest Chronicles will delight anyone who loves Harry Potter or Susannah Clarke’s Jonathan Strange & Mr Norell.
Read more