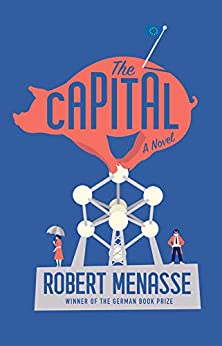 “A dark comedy of manners packed with urgency” (H. W. Vail, Vanity Fair), The Capital is an instant classic of world literature.
A highly inventive novel of ideas written in the rich European tradition, The Capital transports readers to the cobblestoned streets of twenty-first-century Brussels. Chosen as the European Union’s symbolic capital in 1958, this elusive setting has never been examined so intricately in literature. Translated with "zest, pace and wit" (Spectator) by Jamie Bulloch, Robert Menasse's The Capital plays out the effects of a fiercely nationalistic “union.”

Recalling the Balzacian conceit of assembling a vast parade of characters whose lives conspire to form a driving central plot, Menasse adapts this technique with modern sensibility to reveal the hastily assembled capital in all of its eccentricities. We meet, among others, Fenia Xenopoulou, a Greek Cypriot recently “promoted” to the Directorate-General for Culture. When tasked with revamping the boring image of the European Commission with the Big Jubilee Project, she endorses her Austrian assistant Martin Sussman’s idea to proclaim Auschwitz as its birthplace—of course, to the horror of the other nation states. Meanwhile, Inspector Émile Brunfaut attempts to solve a gritty murder being suppressed at the highest level; Matek, a Polish hitman who regrets having never become a priest, scrambles after taking out the wrong man; and outraged pig farmers protest trade restrictions as a brave escapee squeals through the streets.

These narratives and more are masterfully woven, revealing the absurdities—and real dangers—of a fracturing Europe. A tour de force from one of Austria’s most esteemed novelists, The Capital is a mordantly funny and piercingly urgent saga of the European Union, and an aerial feat of sublime world literature.