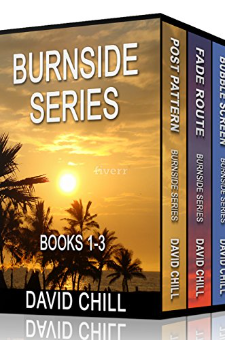 Three murder mysteries -- but the theme always comes down to sex and money…From a USA TODAY Bestselling Author -- David Chill’s colorful and well-crafted mystery series captures both Raymond Chandler’s gritty vision and Robert B. Parker’s biting humor. Set in Los Angeles, the critically acclaimed and award winning Burnside Series delivers clever plots, crackling dialogue and fascinating characters!The First 3 Novels In The Burnside Mystery Series (Box Set # 1) Includes:POST PATTERNFADE ROUTEBUBBLE SCREENPOST PATTERN (Book 1): On a dark Los Angeles freeway, someone fires a gunshot at a local football star. His family turns to Private Investigator Burnside, a former football star himself, who has recently left the LAPD. As he battles his way through the investigation, Burnside's own life is repeatedly placed in jeopardy, and the body count starts to pile up. Burnside encounters beautiful girls, wayward athletes and overworked cops on his way toward finding a killer who knows he's looking for them. And as he navigates this perilous path, Burnside also comes to grips with a betrayal from his past, one that keeps returning to him, no matter how hard he tries to avoid it. Set against the sun drenched backdrop of a hot Los Angeles summer, Post Pattern provides readers with an engaging, action-packed story. The novel delivers a smart, sexy plot with crackling dialogue and fascinating characters.FADE ROUTE (Book 2): A candidate for mayor has been murdered and there's one obvious suspect. But Burnside, the former football star turned private investigator, pushes forward into a harrowing investigation that reveals more and more possible culprits, all with their own motives. As the action intensifies, Burnside himself becomes embroiled in a case which goes beyond just one murder. And when the police suspect he's a person of interest, Burnside must race against time to find the killer. With little more to go on than his gut feeling, Burnside pokes at everything around him. Desperately trying to untangle a web of deceit that threatens to destroy him personally, he is also faced with a scenario that could take down an entire community..BUBBLE SCREEN (Book 3): It starts with some missing warehouse inventory, but the case quickly moves beyond simple larceny. And when theft turns to murder, the stakes rise dramatically, and the action intensifies. The story leads Private Investigator Burnside onto the trail of some people who will do anything to acquire money -- and they will use any means necessary to keep it. And as he plunges into the investigation, Burnside also has to make a life altering decision about his own future. Interweaving the world of business with the world of football, Bubble Screen is set in the heart of Los Angeles. It is a captivating thrill ride that combines fascinating characters, wry humor, and an explosive ending that is both stunning and unexpected. Read the entire Burnside Mystery Series: Book 1: POST PATTERNBook 2: FADE ROUTEBook 3: BUBBLE SCREENBook 4: SAFETY VALVEBook 5: CORNER BLITZBook 6: NICKEL PACKAGEBook 7: DOUBLE PASSBook 8: TAMPA TWOBook 9: FLEA FLICKERBook 10: SWIM MOVEBook 11: HARD COUNT