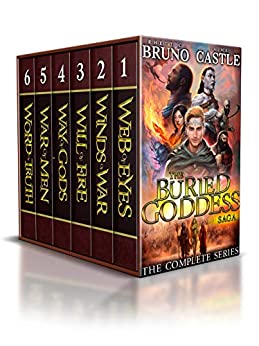 Get the Buried Goddess Saga Boxset, featuring all six action-packed books in the bestselling series. Over 3,000 pages of adventure, magic, war, and a diverse cast of characters you won’t soon forget.

As the shadows of evil spread across Pantego, heroes rise from unexpected places to join the fight against the Buried Goddess. If they fail, the world will fall with them.

A rotten thief who believes himself to be far more important than he really is.

An orphaned blood mage barely able to control the magic coursing through her veins.

A disgraced knight dispatched on a suicide quest by his mad queen.

The daughter of a famous warlord, out to prove she too deserves to lead armies.

They're not the heroes the world envisioned, but they're the only ones who can stop the Buried Goddess as she seeks to return and exact her vengeance on the people of Pantego.

Buy this Special Edition Omnibus to experience a Saga with something for every fan of Epic Fantasy, from the Forgotten Realms to Game of Thrones. It's perfect for fans of Michael J. Sullivan, Kel Kade, and Will Wight.