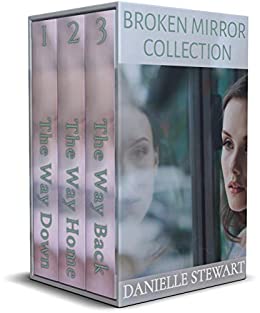 Book 1: The Way Down
Roark Miller protects people for a fee. A substantial one. It’s a fair exchange. His expertise in security for their money. Socialites. Diplomats. Famous athletes. He doesn’t ask questions once the check clears. No matter how screwed up the job gets, it’s still less stressful than his days as a homicide detective in Detroit. Roark had blurred the lines between right and wrong too many times to pick up his badge again. But his past won’t stay buried for long.

Demi Kay finds herself choking on a cloud of body spray in a bar crawling with college-aged kids. It was meant as a night of celebration but turns quickly to a nightmare she can’t wait to escape. The only silver lining is the attractive bodyguard who looks equally disappointed with the establishment.

Roark and Demi find they have far more in common than their mutual distain for the party scene. When Roark realizes Demi is a victim from a case he’d consulted on a decade ago, he knows trouble is just around the corner. Mysterious threats turn to violence and Roark is the only thing standing between Demi and danger. But will he be enough?

Book 2: The Way Home
There are things, once put in motion, that can’t be stopped. Demi has found herself on the wrong side of danger. Everything she once thought to be true is suddenly in question.

Roark has never let his feelings get in the way of his job. Protecting people requires the ability to keep his distance. Those rules flew out the window the moment he met Demi.

Book 3: The Way Back
Alexandria runs. She hides. She evades. The last ten years of her life have been spent trying to survive. The best strategy was to travel alone. People were liabilities and never worth the trouble. When her sister tracks her down and longs for a relationship, Alexandria knows it won’t end well. Especially when danger and death lurk around every corner.

Charger won’t let up. The men who shot up his car and almost killed him have to pay for what they’ve done. The more he learns the more he realizes just how despicable they are. He planned for danger. He expected gunfire. But Charger hadn’t accounted for Alexandria and the whirlwind of drama that came with her.

When there is no where else to turn and no roads left to run down, Alexandria must decide if she’ll embrace the safety of those who want to protect her, or set off on her own again.