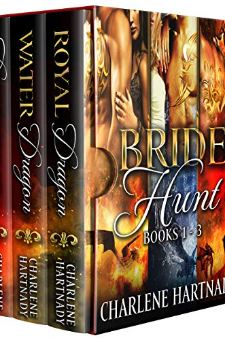 A Dragon Shifter Box SetBook 1: Royal DragonDragon shifters are a dying breed. There are so few females left that if drastic measures are not taken, and soon, it’ll be over for the species. The threat of extinction looms.King Blaze finally accepts that there is no other option but to evoke an age-old tradition.The Hunt.The eligible dragon shifter males must hunt a handful of females. It’s first catch, first serve. The biggest problem is that the females are human. Despite feedback to the contrary, Coal thinks they are weak and breakable. In his opinion, not capable of surviving the hunt, let alone the mating that will follow. He doesn’t believe that a lowly human is capable of birthing him a royal heir, so why has his brother, the king, tasked him with claiming one?He can’t believe this is happening to him. Especially when most of the males in their tribe are willing to accept one of these puny females. Not him. He’s never rutted with one and doesn’t have any desire, whatsoever, to rut with one in the future, let alone mate and impregnate one. Claiming one of these females will not be an easy feat considering there are three other dragon tribes vying for the opportunity.How the hell is he supposed to do all of this when he doesn’t want to come within a mile of one of these unsavory creatures?Book 2: Water DragonTorrent took part in the much-anticipated hunt. Luckily, he managed to secure himself a female. Although the human was not his first choice, she’ll do.A fertile female is a fertile female after all. An heir is what he needs and an heir is what she’ll give him. In return, she’ll get to be queen of the water kingdom.What more could a female wish for?Candy is hunted like an animal and won by an arrogant shifter who doesn’t even want her. She doesn’t care that he’s a king. So what if he’s really good looking and that underneath all that bristling, alpha male is a sweet guy. Although sweet is probably not the right description for the savage, water king.The only thing he’s interested in is mating her, so that she can pop out lots of dragon shifter babies. Well, no thanks! She’s not interested. As soon as she’s able to get that through his thick skull, she’s out of there. Torrent promised her she could leave if things didn’t work out between them and she plans on holding him to his word.Book 3: Dragon KingBlaze has loved and lost before. He’s been down that slippery path before and never wants to go there again. Especially not with a human. It’s a great pity that he has no choice. The problem is that he’s the Fire King, ruler of all four kingdoms. Blaze is expected to have heirs. The sooner the better. He’ll have to take a human as his mate, one that will bear his young, but he doesn’t have to love her. Blaze plans on handling it like a business transaction. No love, no emotion, no problem.Guaranteed HEA!The Story Contains strong sexual themes/language and is not intended for readers under the age of 18.