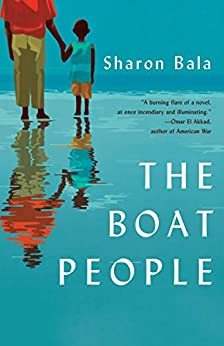 Globe and Mail bestseller, The Boat People is an extraordinary novel about a group of refugees who survive a perilous ocean voyage only to face the threat of deportation amid accusations of terrorism

When a rusty cargo ship carrying Mahindan and five hundred fellow refugees from Sri Lanka's bloody civil war reaches Vancouver's shores, the young father thinks he and his six-year-old son can finally start a new life. Instead, the group is thrown into a detention processing center, with government officials and news headlines speculating that among the "boat people" are members of a separatist militant organization responsible for countless suicide attacks—and that these terrorists now pose a threat to Canada's national security. As the refugees become subject to heavy interrogation, Mahindan begins to fear that a desperate act taken in Sri Lanka to fund their escape may now jeopardize his and his son's chance for asylum.
Told through the alternating perspectives of Mahindan; his lawyer, Priya, a second-generation Sri Lankan Canadian who reluctantly represents the refugees; and Grace, a third-generation Japanese Canadian adjudicator who must decide Mahindan's fate as evidence mounts against him, The Boat People is a spellbinding and timely novel that provokes a deeply compassionate lens through which to view the current refugee crisis.