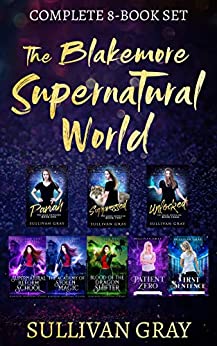 Imagine a world that doesn't know magic exists ... but is about to find out.

This complete 8-book YA urban fantasy set is a slow burn in magic, following three young women through interconnected stories in one big world.

Meet Taya ... a typical teenage girl who discovers she isn't as typical as she thinks. Neither is her new group of friends. Her family has been keeping secrets, and when they all come to light, nothing will be the same. Especially not after kissing a wolf shifter...

Meet Cade ... known as the Paranormal Princess, she's a high profile supe. At least, until her abilities disappear. Banished to Supernatural Reform School, where broken supes go to "recover," she falls for hot dragon shifter prince Sebastian and discovers that her power weren't lost--they were stolen.

Meet Kallie ... working in a supernatural prison, she hopes to use her powers as a Healer to rehabilitate inmates. But after getting caught up in an attempted prison break, she realizes that healing isn't her only power. And without the help of handsome vampire Kurt, she might find herself on the wrong side of the prison walls.

Three series, eight stories, and plenty of slow-burn romance. Don't miss over a thousand pages of action and romance!

While there is plenty of gripping action, these books are mild in terms of language and/or adult situations. Trigger warning: there is an attempted sexual assault. It ends almost before it begins, but still may be triggering to some.