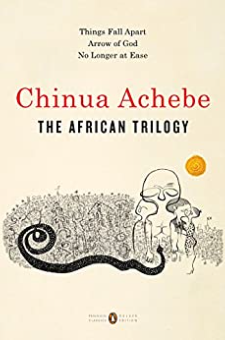 Chinua Achebe is considered the father of modern African literature, the writer who "opened the magic casements of African fiction." The African Trilogy--comprised of Things Fall Apart, Arrow of God, and No Longer at Ease--is his magnum opus. In these masterly novels, Achebe brilliantly imagines the lives of three generations of an African community as their world is upended by the forces of colonialism from the first arrival of the British to the waning days of empire.The trilogy opens with the groundbreaking Things Fall Apart, the tale of Okonkwo, a hero in his village, whose clashes with missionaries--coupled with his own tragic pride--lead to his fall from grace. Arrow of God takes up the ongoing conflict between continuity and change as Ezeulu, the headstrong chief priest, finds his authority is under threat from rivals and colonial functionaries. But he believes himself to be untouchable and is determined to lead his people, even if it is towards their own destruction. Finally, in No Longer at Ease, Okonkwo's grandson, educated in England, returns to a civil-service job in Lagos, only to see his morality erode as he clings to his membership in the ruling elite. Drawing on the traditional Igbo tales of Achebe's youth, The African Trilogy is a literary landmark, a mythic and universal tale of modern Africa. As Toni Morrison wrote, "African literature is incomplete and unthinkable without the works of Chinua Achebe. For passion, intellect and crystalline prose, he is unsurpassed."