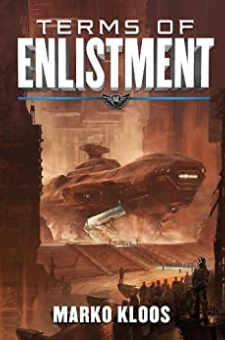 “There is nobody who does [military SF] better than Marko Kloos. His Frontlines series is a worthy successor to such classics as Starship Troopers, The Forever War, and We All Died at Breakaway Station.” —George R. R. MartinThe year is 2108, and the North American Commonwealth is bursting at the seams. For welfare rats like Andrew Grayson, there are only two ways out of the crime-ridden and filthy welfare tenements: You can hope to win the lottery and draw a ticket on a colony ship settling off-world . . . or you can join the service.With the colony lottery a pipe dream, Andrew chooses to enlist in the armed forces for a shot at real food, a retirement bonus, and maybe a ticket off Earth. But as he starts a career of supposed privilege, he soon learns that the good food and decent health care come at a steep price . . . and that the settled galaxy holds far greater dangers than military bureaucrats or the gangs that rule the slums.The debut novel from Marko Kloos, Terms of Enlistment is an addition to the great military sci-fi tradition of Robert Heinlein, Joe Haldeman, and John Scalzi.Revised edition: This edition of Terms of Enlistment includes editorial revisions.