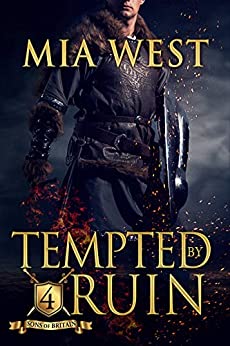 It’s hard to be a ruthless mercenary when the man who owns your heart won’t stop risking his neck.

Gawain has earned his place in Arthur’s small gang of warriors with a bold agility that pays in their secret missions against the Saxons. Capturing the heart of a certain mercenary has been the hawk’s only failure.

“Try again in seven years,” Palahmed said. As if Gawain had nothing better to do than mark the hours. He has plenty of things to do, and waiting for any man—even one as tall, dark, and miserable as Palahmed—isn’t one of them.

Not that he’s above showing the sell-sword what he’s missing.

Six and a half years ago, Palahmed threw down the stupidest challenge of his life, and he’s regretted it every day since. He wasn’t wrong to do it; his history with younger men has been a disastrous journey, pierced through with guilt and shame.

And Gawain is young—and cocksure and beautiful and entirely infuriating. Every time the hawk slips into enemy territory, Palahmed must shore up his inner defenses or lose his mind to worry.

But every stronghold has a weak point.

When an unexpected mission threatens to set Gawain on a collision course with the brutal father he escaped, Palahmed can’t help but swear his sword to back him. Gawain must agree or appear a coward, even as Palahmed braces himself to get closer than ever to the one man who could bring his fortress crashing down.

Amid the cold, harsh beauty of Britain’s far north, the two will have to face the truth unspoken between them, or neither will survive to tell the tale.

TEMPTED BY RUIN is the 4th novel of the SONS OF BRITAIN series.

SONS OF BRITAIN series
They’re a long way from legendary. Amid the volatility of 6th-century Britain, Arthur and Bedwyr are just two young men, born to fight and bound to their warlord by blood and oath. But when fierce hearts collide, loyalties can shift, creating bonds far stronger—and ideas far riskier—than their world may be ready for.