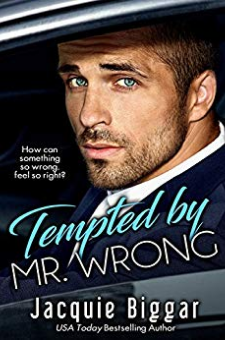 Sizzling romance with steamy love scenes, also a must in her novels, but it's the characters that make this a five star and a must-read. I laughed, I swooned, I gasped (totally didn't figure out the murderer until Biggar revealed it), I cried. Highly recommend!Amazon ReviewerThis is the first story I’ve read by Jacquie Biggar. It won’t be the last. TEMPTED BY MR. WRONG hits all the right romance notes Amazon ReviewerHow can something so wrong, feel so right? Falling for her step-brother is a mistake T.J. doesn't want to repeat, but one look into those sapphire blue eyes and she's ready to give Jason whatever he wants. Tammy-Jo Hawthorne's marriage was floundering, but she never expected her husband to make her the laughing stock of Magnolia.And she definitely didn't expect to trip over him in their front yard after he'd been murdered. Jason McIntyre was forced out of his home and the love of his life by the man who'd haunted his nightmares for ten long years.Now Jason's back--and he wants revenge.Related subjects include: cozy mysteries, women sleuths, murder mystery series, whodunit mysteries (whodunnit), amateur sleuth books, book club recommendations, humorous murder mysteries, women's fiction.