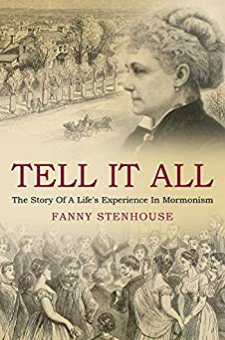 “In these pages, a woman, a wife and mother, speaks the sorrows and oppressions of which she has been the witness and the victim.” Harriet Beecher StoweFanny Stenhouse’s famous work Tell it All is a withering attack on the practice of polygamy that developed as a prominent tenet of Mormon faith in the nineteenth century.She begins her story with an account of how as a young woman her family had converted to the Church of Jesus Christ of Latter-Day Saints and how she had attracted the attention, and subsequently married, T. B. H. Stenhouse.Living in Europe they were unaware of how their religion was developing in the Midwest and how the practice of plural marriage was beginning to become ever more prevalent among the members of their faith.Responding to encouragement and counselling they eventually emigrated to the promised land of Utah and to their horror they began to learn that the rumors of Joseph Smith’s polygamic revelation were true and that some of the church leadership, such as Brigham Young, had over fifty wives.Tell it All provides fascinating insight into how the Mormon faith was developing in the mid-nineteenth century and how women such as Fanny were struggling to come to terms with doctrines such as polygamy.The Church of Jesus Christ of Latter Day Saints largely distanced itself from polygamy in the later-nineteenth century, much due to the work of women such as Fanny Stenhouse and others including a former wife of Brigham Young, Ann Eliza Young.This book also uncovers some of the other darker moments of Mormon history such as the Mountains Meadows Massacre, in which the men and women of an emigrant wagon train were indiscriminately slaughtered by Mormons of the Nauvoo Legion.“added more details on polygamy, on Brigham Young’s life in polygamy, and on the Mountains Meadows Massacre” The John Whitmer Historical Association JournalFanny Stenhouse was an early Mormon pioneer who, along with her husband T. B. H. Stenhouse, defected from The Church of Jesus Christ of Latter-day Saints, largely due to their disagreements with the church about polygamy. Tell it All A Woman's Life in Polygamy was first published in 1872 and Fanny passed away in 1904.