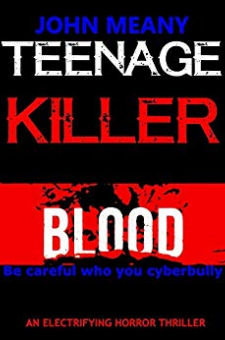 Welcome to Brockton, New Jersey, a peaceful seashore town where nothing truly terrifying ever happened until now.After being cyberbullied for his entire senior year of high school by three of his former friends, eighteen-year-old Terrence Marshall, a loner, an outcast, snaps! One night while high on hallucinogenic mushrooms and PCP Terrence seeks his cyberbullies out. Once he locates them, he murders all three of his former friends in a barbaric manner with a hatchet.But in the aftermath of this unspeakable crime, the questions becomes, “Would Terrence have gone after his former friends on his own? Or did the mysterious Dark Man, who might or might not exist, put the hatchet in his hand?”This is what Terrence’s family longs to find out, as well as the entire country. The heinous murders become one of the biggest stories reported by the U.S. media since the Virginia Tech shooting and Columbine. ----------------------------------------Teenage Killer- Horror/Suspense/Thriller eBookCategories:HorrorSuspenseThrillerGothicCrime FictionMurderRevengePsychological HorrorSuspense HorrorSupernaturalParanormalDrugsDarkScaryDisturbingCreepy