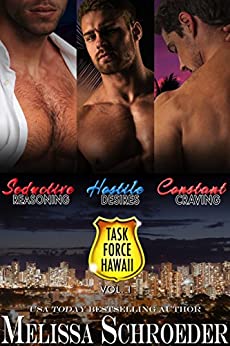 Get the exciting first three books of the Task Force Hawaii series. It includes the following books:

SEDUCTIVE REASONING
Book One
He's got a killer to catch and no time for love. Fate has other plans.

Former Army Special Forces Officer Martin “Del” Delano has enough on his hands chasing a serial killer and heading up TASK FORCE HAWAII. He definitely doesn’t need the distraction of Emma Taylor. From the moment they meet, she knocks him off his feet, literally. Unfortunately, she’s the best person to have on the team to make the connections to help them catch their killer.

For Emma, it’s hard to ignore the lure of a man like him. Tats, muscles and his Harley cause her to have more than a few fantasies about Del. He’d never be interested in a geek like her, but she can’t resist toying with him. When she pushes the teasing too far, she ends up in his bed. She convinces herself she can handle it until the moment he steals her heart.

Del can’t help falling for the quirky genius. She’s smart, funny and there’s a sweet vulnerable side to her that only he can see. As Emma gets more involved with the investigation, she becomes the target of the psychopath. When the danger escalates, Del promises to do anything to save the woman who not only captured his heart but also his soul.

HOSTILE DESIRES
Book Two
As a cold case heats up, two former adversaries discover there is a thin line between love and hate.

Seven years ago, Dr. Elle Middleton’s world crashed and burned. She has rebuilt her life and found comfort in her work as the medical examiner for TFH. When a new case leads to a cold case, she is beyond excited for the challenge, until she finds out the one man she wants to avoid is her partner on the case.

Graeme McGregor isn’t any happier with the assignment. The doctor gets under his skin in more ways than one. He’s avoided his attraction by keeping his distance from her, but working with her has made it impossible to resist taking a little taste.

One kiss leads to another…then to a full blown affair. But even as they draw closer to each other, secrets from that long ago murder rise to the surface. The killer’s determination to stay free leads to a dangerous confrontation that puts both of their lives in peril and could leave TFH in shambles.

Charity Edwards has never been a woman who liked to compromise–not at work and definitely not in her personal life. So, when TJ Callahan appears on the scene as their FBI liaison, she decides to take a chance on the slow talking Texan.

TJ doesn’t like undercover work, but thanks to an old case, he has been tasked to do just that. He uses his position to infiltrate TFH to investigate Charity, a woman well-known for her hacking skills. His almost instant attraction he has to Charity makes it impossible not to blur the lines and he soon finds himself falling for the impossible woman.

When his assignment is revealed, Charity wants nothing to do with him, but she has no choice. Thanks to TJ’s investigation, Charity’s life is in jeopardy and he will do anything to protect her–even if it means sacrificing himself. Read more