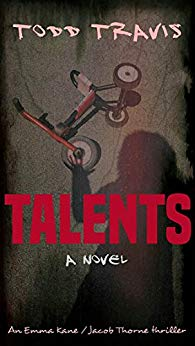 In 1989, a school bus filled with young children disappears. It drove into a tunnel, a tunnel with no exits, and did not drive out. Witnesses saw the bus go in. No one saw it come out. It vanished into thin air as a community panics. Everyone panics. ?Everyone except for a twenty-four year old college dropout named Jacob Thorne. ?In 2004, three people are brutally murdered in Roanoke, Virginia, two of them in a sealed panic room, a room locked from the inside. ?The only trace evidence is a single hair from the suspect. A suspect that has been dead for three months, killed by the same people who were just murdered in the panic room. ?After another man is murdered in a hospital, a crime caught on tape, nearly everyone is convinced a ghost has come back from the grave to avenge a murder. ?Everyone, that is, except for a young DC homicide detective suffering from PTSD named Emma Kane. ?To be a profiler, it takes more than just research and hard work. It takes more than simply brains. ?It takes… TALENT. And you need to have it from the very beginning. TALENTS - An Emma Kane / Jacob Thorne thriller. An origin story of two very unique people.