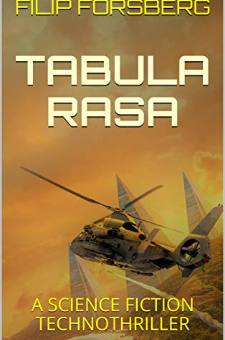 The explosive first adventure in Filip Forsberg's breakout Jonathan Jarl series!A near-future science fiction adventure. A rookíe agent on his first assignment. A stolen artifact that holds the key to unlimited power. An alien lifeform heading for Earth. Let the adventure begin!The fate of the world hangs in the balance when Amber Group rookie agent Jonathan Jarl is sent on a heart-pounding race in this near-future thriller about stolen treasures, a future Earth, clones, visiting aliens - and non-stop action. In 2048, the earth is under strain due to natural disasters and accelerating pollution of the environment. On the coast of Madagascar, a ruthless corporate leader creates his own vision of the future in the shape of Tabula Rasa, a mega-complex inhabited by over a million people.Jonathan is on his first assignment to retrieve the famous Nebra Sky disc. During the mission, he comes face to face with some of Tabula Rasa’s darkest secrets.Meanwhile, in orbit around the moon, a discovery is made that has potential implications for the entire human race but Tabula Rasa is doing everything in its powers to keep the discovery secret. In a lab within the mega-complex, an idealistic scientist decides to share the discovery with the world. She takes a fateful decision that puts her life on the line.TABULA RASA is the first book in the Jonathan Jarl SeriesWhat readers are saying about TABULA RASA?????"I had almost given up on Science Fiction until I read Mr. Forsberg's two books. It is Science Fiction that we can actually relate to as it jumps 50 years in the future. Well written with a great story that could be plausible in the future?" - AMAZON REVIEW?????"There was nothing. Then something happened. Light, life, hope. Eons of time for a world to live and then it was time to die. They sent out hope in the form of spheres to send a new universe when the Big Bang returned in another universe. Amber Group is a secret, nongovernmental organization that specializes in finding unusual items and gathering them for use they choose. Jonathon is one of their many agents sent to find a mysterious artifact that is the key to something to come in the near future. Tabula Rasa is one-off multiple mega-settlements in the post-apocalyptic world." - AMAZON REVIEW?????"A new self-sustaining city is created off Africa by a pathological billionaire. Alien spheres start to be uncovered around the world. Thus begins our story begins." - AMAZON REVIEW?????"This is is a story of terrestrial and extraterrestrial events. I actually read this in 5 days. It moves at a fast pace, and there are 3 stories in one, but they all come together at the end, but keep you guessing until book 2. A very well written book, with a bit of history at the start. I made a gamble to get all 3 books, and it has paid off! I do not think any reader will be disappointed. HAPPY READING!" - AMAZON REVIEW?????"Just getting really good and Wham! it's over. Damn! I would gladly read a sequel or two if they are forthcoming."?????"What an amazing book. This one has it all. Love, spying, fighting, intrigue, and a sci-fi aspect that includes human cloning and from space comes new knowledge to mankind. It is well written and keeps a good pace throughout the book. One supervillain and one superhero make the ending memorable. Tabula Rising is the kind of book that you will want to read it again later on, I know I will."