Symphony of the Wind 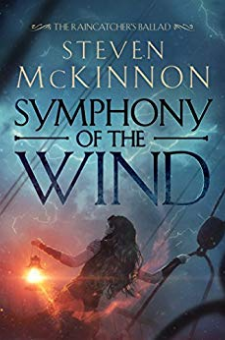 Longlisted for the Booknest 2018 Fantasy Awards - Best Self Published FantasyFinalist in Mark Lawrence's SPFBO 2018A bounty hunter with a death wish. A girl with fearsome powers. A kingdom on the brink of destruction.Serena dreams of leaving her unforgiving desert home far behind in her very own airship. But when an assassin's knife meant for Serena kills her friend instead, the rebellious orphan ventures into the corrupt heart of the kingdom to discover who put a price on her head. With each new turn, she edges closer to uncovering the awful truth… And the mystical powers brewing deep within her.After his fiancée’s death, soldier-turned-bounty hunter Tyson Gallows is eager to sacrifice his life in the line of duty. When a foreign enemy assassinates a high-ranking official, he vows to bring them to justice. On the hunt for a killer, Gallows exposes a sinister plot that proves his fiancée’s death was no accident.Driven by revenge, Serena and Gallows must join forces to take down the conspiracy before the kingdom falls to ruin.Symphony of the Wind is the first book in a gritty epic fantasy trilogy. If you like hardened heroes, bloody action, and dark magic and monsters, then you’ll love Steven McKinnon’s visceral adventure.Buy Symphony of the Wind to climb aboard a brutal, breathtaking thrill ride today!