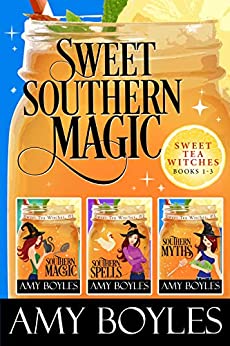 SOUTHERN MAGIC
It only takes a second for life to go to heck-in-a-hand-basket!
In less than twenty-four hours Pepper Dunn loses her job, her boyfriend, and her home.
It's the worst day of her life.

But when Pepper discovers she’s a witch and has inherited the most important store in the magical town of Magnolia Cove, Alabama, she’s as happy as a pig in mud.
Too bad the shop is a familiar pet store and Pepper doesn’t like animals—not even a teensy bit. Determined to sell the shop and get the heck out of town, Pepper’s plans go haywire when a local storeowner winds up dead and Pepper gets accused of murder.
Thrust into a magical mystery, Pepper teams up with a mysterious private detective and a cat so traumatized by the murder that she’s not talking—and that cat could hold the key to Pepper’s innocence.

Now Pepper must avoid trouble, solve the mystery, and placate her new grandmother, who keeps a strict ten p.m. curfew that’s enforced by the talking end of her shotgun.
Sounds like a simple day in the life—as if. Can Pepper solve the mystery or will she become the next victim of the Magnolia Cove murderer? And most importantly, will Pepper learn to love the animals she’s in charge of?

SOUTHERN SPELLS
All Pepper Dunn wants is a quiet life in the witchy town of Magnolia Cove, Alabama. But when the Cotton and Cobwebs Festival arrives, her dream goes up in smoke. This year, grandmother Betty is determined to win the award for best magical creature against Melbalean Mayes, the contest matron. To win, Betty needs Pepper’s help.

But when Melbalean winds up dead and Betty is accused of the murder, Pepper is thrust into one role she never expected—she must complete a list of chores that keeps her town running.

Pepper has her hands full—she must ensure the safety of her town, try to clear Betty’s name, and make sure no one else winds up a victim of the Magnolia Cove murderer. Can she do it? Or will she become the next victim?

SOUTHERN MYTHS
Just when Pepper Dunn starts accepting her ability to communicate with animals she’s thrown for a loop—an egg containing a baby dragon winds up on her doorstep.

Convinced the creature will grow up to become a destructive force of nature, Pepper gives the dragon to the first person interested in buying—a traveling magician named Mysterio, who claims he can communicate with the dead.

Relieved to be free of the creature, Pepper’s world turns upside down when Mysterio reveals that he has a message for Pepper—from her dead mother. Pepper can’t wait to discover what it is. But before she has a chance to find out, Mysterio is murdered.

Left with a set of clues, Pepper is determined to discover the information her mother wanted her to know. But will untangling the mess of clues lead Pepper on the right path, or will it lead her straight into the hands of the murderer?

Find out now! Grab your copy!