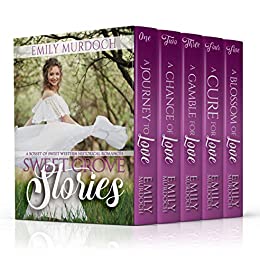 Read the full series now! All five of Emily Murdoch's sweet Western historical romances, all in one boxset - now in Kindle Unlimited!

A Journey to Love
Elizabeth Morrison has inherited a small fortune, but a woman in 1840 doesn’t usually go it alone. With her sister Katherine missing and both parents gone to be with the Lord, she has no choice but to find her own way. Her journey takes her through an abandoned orchard, and she falls in love with derelict Sweet Grove – and its previous owner, Jonathan Bryant. His father lost the family land in a bet, and his bitterness hasn’t been sweetened by the fruit of his labour.
Will they both learn that life never goes in the direction you think, and love is always ready to take you on a different journey?

A Chance of Love
Katherine Morrison’s elopement at 16 ended badly – and there’s only one occupation for a fallen woman in 1841. Too ashamed to return to her family and too destitute to avoid the work that shames her, she puts her faith in the Lord that he will save her from her own mistakes. But when a customer collapses before her work is done, she has a chance of returning back to the life that she wanted.
But that life is gone. Her sister Elizabeth has moved on, and Thomas Bryant has his own agenda. He’s fallen for the delicate yet fierce woman who seems to have a past that even he cannot untangle. When a chance letter reveals the location of Katherine’s sister at Thomas’ family orchard, they cannot help but grasp at the opportunity to find their families again. Could the chances that continue to come their way be more than just coincidence?

A Gamble for Love
Aaron Bryant inherited all the worst from his father: his temper, his name, and his gambling habit. Thrown out of the family home, he survives one wager at a time, never finding the hope and security that Sweet Grove gave him in his youth, in the 1820s. But when he accidentally loses even the clothes on his back to a saloon owner with better looks than morals, Phoebe Vazquez has a chance through blackmailing him of gaining a life that she wanted.
But Aaron has his own agenda. He wants to return to Sweet Grove, his childhood farm, and buy it back from whoever bought it after his father lost it – and kick his own dependency on the thrill he receives from the dice. When the opportunity to return there arrives, and with a wife in tow, he can’t help but grasp at it. Yet Phoebe has secrets of her own, and she’s not willing to bet that anyone would accept her past...

A Cure for Love
When Dr Gerald Anderson arrives at Sweet Grove, it’s hard not to be suspicious: after all, he was hounded out of his last practice last year in 1843, and he’s only accepted when trainee pastor Aaron Bryant accepts him. The pastor’s sister Mariana, on the other hand, is not so sure. Left blind by the incompetence of a previous doctor, she’s got no kindness for medical men, and a determination to leave him in the cold.
But the warmth of Sweet Grove and its small community is hard to ignore, even when you want to withdraw from the world, and soon Gerald finds himself thrust into Mariana’s path...

A Blossom of Love
Abigail Bryant is the youngest of the Bryant tribe, and the most ignored – which is just how she likes it. Tending her herb garden is the way that she can support the growing town without talking too much to anyone, but the arrival of the new doctor demands a different kind of herb, and she needs seeds. Enter Laken Weston, a travelling tinker who refuses to put down roots but has the exact seeds that Abigail needs, along with the know-how to get them to grow. Her embarrassment almost overcomes her, but they strike a deal: he stays for the growing season, and he receives free bed and board. And then he leaves.
But affection, like their seeds, finds a warm and welcoming home, and soon love starts to blossom between them. But like any new plant, without God’s face to smile upon it, that growth can wither and die...