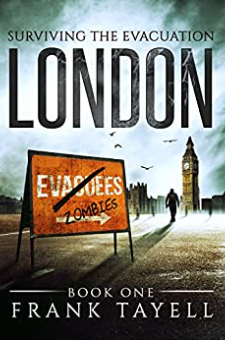 Would you survive the evacuation?The outbreak began in New York. Soon it had spread to the rest of the world. People were attacked, infected and they died. Then they came back. Nowhere is safe from the undead.As anarchy and civil war took grip across the globe, Britain was quarantined. The press was nationalised. Martial law, curfews and rationing were implemented. It wasn’t enough. An evacuation was planned. The inland towns and cities of the UK would be evacuated to defensive enclaves being built around the coast, in the Scottish Highlands and in the Irish Republic.Bill Wright broke his leg on the day of the outbreak. Unable to join the evacuation, he watched from his window as the streets filled with refugees, he watched as the streets emptied once more. He watched as they filled up again, this time with the undead.He is trapped. He is alone. He is running out of food and water. He knows that to reach safety he will have to venture out into the wasteland that once was England. On that journey he will ultimately discover the horrific truth about the outbreak, a decades old conspiracy and his unwitting part in it.The first novel in the post-apocalyptic series “Surviving The Evacuation”. (74,000 words)