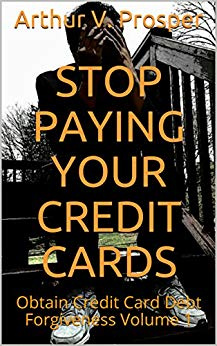 ***SECOND EDITION***This book IS about negotiating forgiveness for your credit card debt by writing your creditor one simple negotiation letter and what to do if the creditor refuses to negotiate. If you owe money on your credit cards and cannot make payments anymore because of financial difficulty, this book is for you. I owed over $100,000 in credit card debt and the debt was hurting my life. I had trouble sleeping at night thinking how long my ever-increasing debt would continue to gnaw at me. Even if I could afford to make the minimum payments and do not borrow anymore, with interest of 25% APR, I will still owe a lot of money after many years of making only minimum payments. The interest alone would total close to $100,000. It took a year of trial and error, hours on the phone and writing meaningless letters most of which I copied from the internet before I saw the light at the end of the tunnel. None of the free advice and letters in the internet worked because the truth is I was not insolvent. I did not qualify for bankruptcy protection. I could have paid my credit card debt by liquidating my assets, selling my house, but that would have been devastating for my family. I kept on thinking of a way for my creditors to reduce my debt. I finally came up with The Letter that uniformly worked in negotiating down my debt. After mailing The Letter to my creditors, I received a reply from one of them offering to accept 50% of what I owed as full payment of my debt. I countered with 5%. We finally agreed on 10% of the original amount as full and final settlement of my balance. Considering I had not paid them for a year, I accumulated a little cash, so I was happy to grab the offer and pay the 10%. I had five credit cards with large balances and The Letter worked satisfactorily on four of the accounts. I settled the 4 accounts for between 5% and 15%. The last hold-out, surprisingly the account with the smallest balance at $13,000 chose to take me to arbitration. This negotiation-resistant creditor perceived that they might collect more money from me that way but they were wrong. I was surprised that not one of the 4 creditors even referred to the contents of The Letter or attempted to verify what I had written in the letter. The Letter aims to convey this message: "Take my final settlement offer or sue me. But if you sue me, you will lose". Ken Clark, author of The Complete Idiot's Guide to Getting Out of Debt: "So many people are trying to get their balances reduced, you call and try to negotiate a balance, and it's 'Get in line.'" The card company's attitude may be, "Yeah, you and everybody else"". My Comment – That’s because you called to negotiate instead of sending them The Letter shown towards the end of this book. Trust me there aren’t that many accounts in default as a percentage of the whole or our banking system would collapse. If you write "The Letter", the creditor will put you at the front of the line.Brian Tawney, Director of Clear One Advantage: "Based on experience negotiating with creditors, debt settlement companies know what percentage of debt owed each creditor is likely to agree to. We use an algorithm that considers 140 different variables and tells us the accounts that have the highest opportunity to settle at any given time. We negotiate in bulk. We can negotiate thousands of cases and get a better settlement for everyone". Translation: Debt Settlement Agencies take only the easy cases that's why they "negotiate in bulk". If they have to spend more time on your case because you have wages a creditor can garnish and assets they can put a lien on, they will not take your case. I like my system better. You write "The Letter" which begs creditors to forgive 85% to 95% of your debt. The creditors can take it or leave it. If they take it, you win. If they leave it, they lose.