Stolen by the Dragon 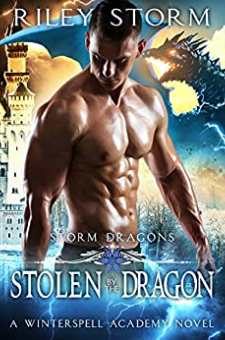 He thought he’d lost everything, but then he found her…The only thing on Damien’s mind is ensuring his race will live on. It’s that single-minded focus that drove the storm dragon through the magical portal, the last of a small band of dragons fleeing an ominous and powerful enemy. When he’s confronted on the other side by a short, sassy and deliciously curvy woman with powers he can’t comprehend, everything changes. He should be focusing on the future of his people, but all he wants to do is focus on her. His dragon is roaring wildly and he doesn’t know how much longer he can resist its call.Anna Sturgis has trained all her adult life at Winterspell Academy. She’s ready to face any of the usual paranormal threats. Werewolves, vampires, Faeries, she’s prepared for them all. What she can’t fight is the sizzling attraction she feels to one dragon shifter in particular. Her studies are beckoning, but the siren call of the muscular male is more luring than anything she’s felt before. If she can’t learn to resist his smile, then she’s going to succumb to him completely.Their nightly rendezvous are strictly forbidden by both sides. Secret passages are their respite, where they are free to explore the connection between them. That is, until everything is exposed, leaving Damien with but one choice. He doesn’t want to do it, but it’s the only way to save Anna. In the process though, he might just put her in even greater danger. Because the evil the dragons thought they left behind isn’t about to give up…