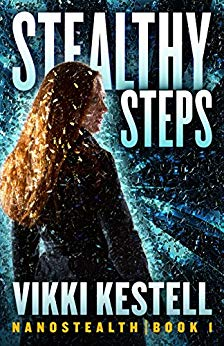 Gemma Keyes was an ordinary, unexceptional young woman with a lackluster life until an overheard conversation ended her budding career and her loyalty to an old friend put her life in jeopardy. As the truth emerged, Gemma discovered—the hard way—that invisibility comes with its own set of problems.My name is Gemma Keyes. Other than my name, I am utterly forgettable—so those who never paid much attention to me in the first place haven’t exactly noticed that I’ve disappeared. Vanished. Oh, it’s much more complicated than it sounds. And let me tell you, the adjustment is difficult.I should tell you about Dr. Daniel Bickel, world-renowned nanophysicist. We used to work together, but I’ll be candid with you: He’s supposed to be dead. Well, he’s not. (Imagine my surprise.) Instead of the proverbial “six feet under,” he’s subsisting in an abandoned devolution cavern beneath the old Manzano Weapons Storage Facility on Kirtland Air Force Base here in Albuquerque.“I need to show you what I’m protecting here, Gemma,” he insisted.I stared into the clear glass case. I could hear . . . humming, clicking, buzzing. A faint haze inside the box shifted. Dissolved. Came back together. Reminded me of how mercury, when released on a plate, will flow and form new shapes. Only this, this thing was “flowing and forming” in midair.“Do you see them?” Dr. Bickel asked.“Them?” I was confused. My mouth opened to a stunned “o” as the silver haze resolved into blue letters.H E L L ODr. Bickel hadn’t pressed any buttons. Hadn’t said anything to them. Hadn’t gestured. He grinned. “Ah. They’ve noticed you. They know they haven’t seen you before.”“Well, I wish they wouldn’t notice me!” I choked on the words, my eyes fixed on the glass case.And I need to warn you about General Cushing. The rank and name likely conjure images of a lean but muscled old soldier, posture rigid, face cemented in unyielding lines, iron-gray hair cut high and tight.Let me disabuse you of that impression. General Imogene Cushing is short and a tiny bit plump. She wears her silvered hair in an elegant braid knotted at the nape of her neck, and she knows how to smile sweetly. With the deadliest of sharks.. You wouldn’t suspect a two-star general, an Air Force O-8, of being a traitor, would you? NanostealthBook 1: Stealthy StepsBook 2: Stealth PowerBook 3: Stealth RetributionBook 4: Deep State Stealth Editorial Review"The author impressed me by backing up the tale with some real science and actual locations. Gemma is one of the most well-developed characters I've seen, certainly not one of those comic-book caricatures that are so common now. She has a real personal history and real flaws that blend in well with the storyline."—The Kindle Book Review