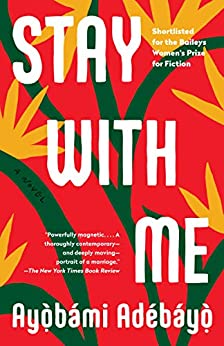 “Powerfully magnetic. . . . In the lineage of great works by Chinua Achebe and Chimamanda Ngozi Adichie. . . . A thoroughly contemporary—and deeply moving—portrait of a marriage.” —The New York Times Book Review Ilesa, Nigeria. Ever since they first met and fell in love at university, Yejide and Akin have agreed: polygamy is not for them. But four years into their marriage—after consulting fertility doctors and healers, and trying strange teas and unlikely cures—Yejide is still not pregnant. She assumes she still has time—until her in-laws arrive on her doorstep with a young woman they introduce as Akin’s second wife. Furious, shocked, and livid with jealousy, Yejide knows the only way to save her marriage is to get pregnant. Which, finally, she does—but at a cost far greater than she could have dared to imagine. The unforgettable story of a marriage as seen through the eyes of both husband and wife, Stay With Me asks how much we can sacrifice for the sake of family. A New York Times Notable BookOne of the Best Books of the Year: NPR, The Wall Street Journal, The Economist, Chicago Tribune, BuzzFeed, Entertainment Weekly, The New York Post, Southern Living, The SkimmA 2017 BEA Buzz Panel SelectionA Belletrist Book-of-the-MonthA Sarah Jessica Parker Book Club Selection Shortlisted for the 2017 Baileys Women’s Prize for Fiction Shortlisted for the Wellcome Book Prize and the 9mobile Prize for LiteratureLonglisted for the International Dylan Thomas Prize