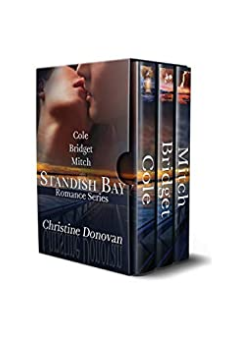 Box set included 3 full length novelsCOLE - BOOK 1 - A STANDISH BAY ROMANCECole Jackson is sent to prison for a murder he did not commit, the murder of his wife Lindsey. She is stabbed to death late one night. A night Cole doesn’t remember, but he does know one thing for certain, he could never have committed the act. His talent as a songwriter and avid reader save him from the loneliness of the cold, dark and unforgiving prison walls. As he joins the world of the free again, after fifteen years in prison, he struggles with his once again fame in being part of a rock-n-roll band, the stigma of being a convicted killer and the fact that his self-esteem and self-respect were lost years ago. What he has is a tarnished reputation and the determination to find the true killer and restore his life as best he can.Shannon Gallagher’s hard work as a writer is finally paying off. She owns a beautifully restored Victorian home on the ocean, is raising a terrific and talented sixteen-year-old son. She believes her life is complete, until she meets Cole Jackson. She idolized him at sixteen, cried at twenty-one when he went to prison. Now at thirty-six, she meets him and falls in love. Only being in love with Cole is more painful than she ever imagines it can be. And more dangerous as the closer Cole gets to exposing his wife's killer, the closer Shannon becomes to being his next victim. BRIDGET - BOOK 2 - A STANDISH BAY ROMANCEBridget Gallagher has the misfortune of spending two years of her life, she can never get back, dating her boss. One day he announces he’s trading her in for a college student. Devastated, she decides she needs a vacation. Her sister, Rachel, accompanies her and they set sail on an Alaskan cruise. On the ship they meet the Petrillo brothers from Nashville and the fun and games begin.Dominic Petrillo, one of Nashville’s finest boys in blue, recently signed his divorce papers. To celebrate his thirty-fifth birthday and cheer him up his two brothers, take him on an Alaskan cruise. During Muster Drills, Dominic locks eyes with Bridget and the ship is not large enough to keep them apart.Once back in Nashville, Dominic decides a change of scenery is necessary and lands a job in Plymouth, Massachusetts. First day on the job finds him investigating a homicide. Not only is it Bridget’s place of employment, but the victim is her ex. Bridget is suspect number one. Dominic is torn between listening to his heart and doing his job. No matter what the evidence says, he will never believe the smart, funny and sexy woman he met on vacation and lost his heart to could be a cold blooded killer.MITCH - BOOK 3 - A STANDISH BAY ROMANCEMitch Gallagher, ex-Naval Aviator, leaves his job flying corporate jets after losing three co-workers in a plane crash. The tragedy has him rethinking his life and priorities and decides it’s time to be closer to family and friends. He sells his condo, moves in with his sister in his hometown of Standish Bay, and begins a new job giving flying lessons. Kindergarten teacher, Faith Harrington, lives in a garage apartment in Standish Bay. Since moving there three years ago she has become close friends with Rachel Gallagher. She accompanies Rachel to a family cookout where she meets a devastated Mitch, still grieving over his lost co-workers. Although there is an instant attraction on both sides, timing couldn’t be worse. During the following weeks Faith and Mitch’s lives change drastically. Against Faith’s rule of not dating parents of her students, she has a brief involvement with Kyle Kennedy. When she ends it, he doesn’t handle it well. Also, her landlady sells her home to Mitch and he becomes her landlord. The attraction between them flares up and they begin dating sending Kennedy into a rage. He believes Faith belongs to him and between that and his violent temper, Faith and Mitch become his target in his desire for revenge.