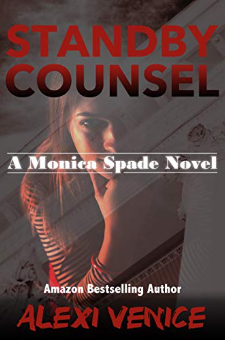 ?????  "A sexy legal thriller that deftly blends an international terror plot with romantic obsession. Highly recommended." - Best Thrillers From Amazon Bestselling Author Alexi Venice, a full-length standalone legal thriller. Monica Spade insists she isn't a trial lawyer, much less one who represents dangerous criminals. Despite her protests, Judge O'Brien orders Monica to serve as standby counsel for a young woman accused of repeatedly stabbing her boyfriend.  Setting aside her abject fear, Monica drags herself to the jail to meet her new client, Stela Reiter. A demure Romanian, Stela looks more like a meek librarian than a person capable of overpowering and stabbing a young man to death. Unlike Monica's other clients, Stela is coy and secretive during their interview.  Meanwhile, Monica's girlfriend, Shelby St. Claire, is keeping secrets of her own, forcing Monica to question the foundation of their relationship. Curiosity being Monica's trademark, she digs into the backgrounds of both women.  Monica uncovers sexual innuendo and layers of international intrigue, then deadly forces come after her, including a Ukrainian thug who will stop at nothing to get what he wants and two suspicious federal agents. Stuck between an unrelenting judge and a killer in a pink cardigan, Monica pursues the truth in court while fighting to keep Shelby and herself out of harm's way.  Set in in the dead of winter in surprisingly progressive Apple Grove, Wisconsin, Standby Counsel will keep readers' hearts racing.  ?????  "Among legal thrillers, STANDBY COUNSEL excels in its depth of characterization. The chapters devoted to Monica's romantic life are no less gripping than those devoted to the primary plot. While Standby Counsel is the second book in the Monica Spade Series, it's a perfect entry point for new fans. Highly recommended." Best Thrillers