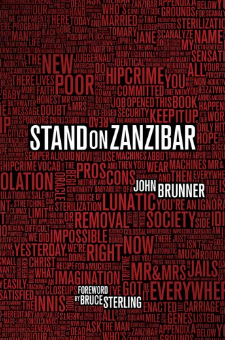 The brilliant 1969 Hugo Award-winning novel from John Brunner, Stand on Zanzibar, now included with a foreword by Bruce Sterling Norman Niblock House is a rising executive at General Technics, one of a few all-powerful corporations. His work is leading General Technics to the forefront of global domination, both in the marketplace and politically---it's about to take over a country in Africa. Donald Hogan is his roommate, a seemingly sheepish bookworm. But Hogan is a spy, and he's about to discover a breakthrough in genetic engineering that will change the world...and kill him. These two men's lives weave through one of science fiction's most praised novels. Written in a way that echoes John Dos Passos' U.S.A. Trilogy, Stand on Zanzibar is a cross-section of a world overpopulated by the billions. Where society is squeezed into hive-living madness by god-like mega computers, mass-marketed psychedelic drugs, and mundane uses of genetic engineering. Though written in 1968, it speaks of now, and is frighteningly prescient and intensely powerful.At the Publisher's request, this title is being sold without Digital Rights Management Software (DRM) applied.