Songs In the Year of the Cat 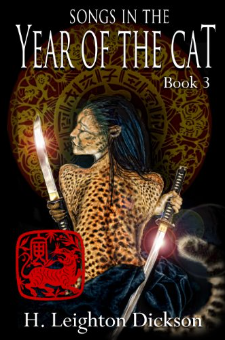 One Shogun, Three Armies, Five Thousand Years of War. The Battle for the Human Race is about to get Wild.SONGS IN THE YEAR OF THE CAT is the Third in the Original Series by H. Leighton Dickson and picks up where TO WALK IN THE WAY OF LIONS leaves off. Ancestors are rising in the west and armies are moving from the North and the East. Captain Wynegarde-Grey has only just returned to the capital of the Upper Kingdom and he is immediately pulled into the conflict as cauldrons of oil are burning all along the Great Wall and the drums of war force all soldiers back into duty. But a mysterious woman is changing things, manipulating behind the scenes as Sherah al Shiva, ninjaah and sorceress, slips back into his life with companions that could divide the known world.This is a sweeping post-apocalyptic tale of genetically altered lions and tigers, wolves and dragons in a world that has evolved in the wake of the fall of human civilization. Half feline, half human, their culture blends those of Dynastic China, Ancient India and Feudal Japan where humans are legend and kingdoms have risen in their stead. Fans of Tolkien, GAME OF THRONES, PLANET OF THE APES or Japanese anime will be entertained in these intelligent and beautifully written pages in a blend of science, fantasy and zoological speculation.