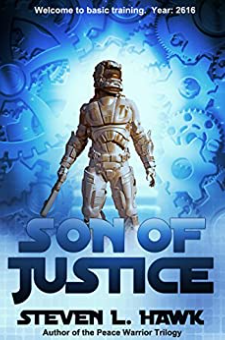 For more than a dozen years, Eli has studied the art of war from some of the most skilled fighters on three planets. There's no question, he has what it takes to be a professional soldier.There's just one problem. His father is General Grant Justice, the most famous man in the galaxy and leader of a new governmental alliance that unites four alien races. When it comes time to enlist, the younger Justice has to make a choice. Rely on his last name and claim an automatic commission as an officer? Or enter basic training as a lowly private and earn his way to the top?For Eli, the decision is an easy one. He changes his name and enlists as an anonymous recruit.Unfortunately, not all of life's choices have such clear-cut answers. An alien-led rebellion is brewing in the ranks of the army he has just joined, and Eli is forced to choose sides. His actions will determine the fate of his father, the alliance, and the entire human race.