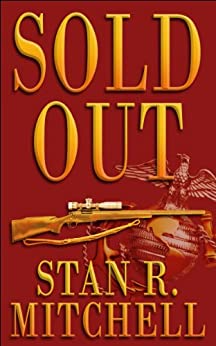 Author Stan R. Mitchell writes a tight sniper/CIA thriller in his blockbuster hit "Sold Out," which plunges readers into a deep, dark conspiracy and should delight those who love Jason Bourne, as well as fans of authors Stephen Hunter, Vince Flynn, and Tom Clancy."Sold Out" is an epic, fast-paced story that shows what happens when free speech slams into the messy realities of national security.Blood flows early and often in this story that will keep you riveted until the very end.Book Description: Nick Woods used to be one of our country's greatest snipers. A Marine who completed a bloody, top-secret mission behind enemy lines years ago, he now just wants to live in peace with his wife.But Nick is about to get caught in a grand conspiracy between a senior investigative reporter and a shadowy, CIA group.After said reporter, Allen Green, breaks the details of Nick's story -- blowing the top off America's national security -- both Nick and Allen find themselves in the sights of a CIA hunter-killer group.This CIA group breaks the law and kills at will, and they'll stop at nothing to take down Nick Woods and the reporter who published the earth-shattering story he'd been chasing for years.“Sold Out” is the first book in the spectacular Nick Woods series, which spans four books and multiple continents.The Nick Woods series has climbed to the top of the charts on Amazon -- and remained there -- for more than three years. It's also been picked up by Audible.com for a multi-book, audio deal.