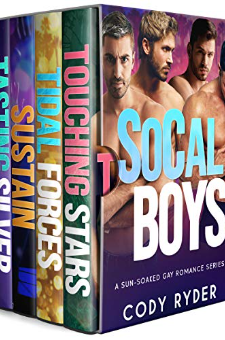 Welcome to SoCal, where the sun shines hot and the boys are even hotter. SoCal Boys is a series of four sweet, fun and fluffy gay romance novels featuring closeted movie stars, dreamy surfer bros, sensitive artists, charismatic musicians, and more—all with unique love stories you’ll fall hard for. Touching StarsWrecked car, wrecked movie, wrecked image. That’s Christopher Lawton: Hollywood’s latest celebrity wreck. After decking Hollywood’s most powerful producer in the face for blacklisting his movie, he’s hidden himself away at a secluded mountain resort called the Constellation Lodge to avoid media attention until the whole thing blows over. He expected to be bored out of his mind. He didn’t expect to meet Jackson Baker, a self-exiled writer with a passionate hate for the film industry. Christopher loves that Jackson has no clue he's famous, but he can’t keep his celebrity a secret forever. Will the truth ruin a connection that seems to be written in the stars?Tidal ForcesCameron Walker has never been in love. It’s not that he doesn’t want it, he’s just never found the right man—until a painting trip to the beach put him right on his canvas. The mysterious surfer in red. He’s charming and sexy, and Cam can’t get him out of his mind…but there’s only one problem: The guy is 100% undeniably straight. As Cameron falls deeper in love with his new friend, he finds it more difficult to hide his feelings—and his orientation—from Lee. It seems like he’ll suffer the pain of unrequited love for as long as they’re together—until the tides of fate change their lives forever.SustainColin Talton just can’t seem to break out of his shell. It’s his second year in college, and he’s still shy, still quiet, and still unable to bring himself to finally explore his sexuality—or anything else. That all changes when he meets a man who's everything Colin isn't, the passionate musician Marcus Moon. As Colin ventures deeper into Marcus’s vibrant world of nightclubs and music festivals, his feelings for his friend grow as intense as the beat just before the drop—but Colin can’t believe Marcus could possibly be gay. Can he finally find the courage to go after his desires, and can he show the stubborn Marcus that love is exactly what he needs to finally reach his full potential?Tasting SilverA former office-worker suffering from a quarter-life crisis, Alan dropped everything in SoCal to search for the passion sorely missing in his life. Except, now that he’s actually in NYC he has no idea where to even begin looking. Enter, James. Charming, sophisticated and adventurous, he's everything Alan isn’t. Not to mention he’s also a movie star—and a much older man. It doesn’t matter how right it feels, how could it ever work? With only four days to spend together in a city far from home, how can Alan convince James—and himself—that this is what they both need?SoCal Boys has something for everyone—straight to gay, friends to lovers, coming out, and even a daddy! Each story is standalone and can be read in any order you choose.