Snatching the Soul of a Siren 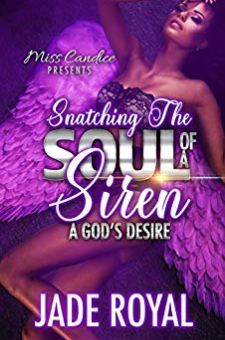 Adonis Maxwell would never forget the purple eyes of the woman he saved from a vicious attack. Unable to escape the thought of her, Adonis secretly searched for her, refusing to just let her get away.As a siren, Nirvana Rose kills men and sucks their souls for survival. She's never hesitated to go for the kill until she laid her eyes on 'him' . His undeniable attractiveness , and captivating ways pulled her in, in ways she's never been pulled in before, especially not by the male species. Refusing to be thrown off her A game, Nirvana focuses on her mission to snatch the soul of a demigod. Unbeknownst to her, the demigod she's sent after is none other than Adonis, the alluring man from before. Which ends up complicating things for the both of them.Though they were drawn to each other, reality set in heavy. Both Nirvana and Adonis are two magical beings fighting on different sides of the same war. Despite their differences, an impossible bond forms between them that changes everything they've come to learn and know about their people. Unearthing true feelings, Nirvana and Adonis begin to unlock secrets wrapped around the both of them that prove vital to their existence. In the end, the both of them are faced with serious ultimatums that will drastically change things either way.