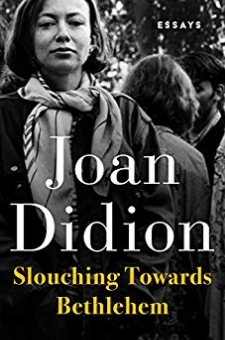 The “dazzling” and essential portrayal of 1960s America from the author of South and West and The Year of Magical Thinking (The New York Times). Capturing the tumultuous landscape of the United States, and in particular California, during a pivotal era of social change, the first work of nonfiction from one of American literature’s most distinctive prose stylists is a modern classic.   In twenty razor-sharp essays that redefined the art of journalism, National Book Award–winning author Joan Didion reports on a society gripped by a deep generational divide, from the “misplaced children” dropping acid in San Francisco’s Haight-Ashbury district to Hollywood legend John Wayne filming his first picture after a bout with cancer. She paints indelible portraits of reclusive billionaire Howard Hughes and folk singer Joan Baez, “a personality before she was entirely a person,” and takes readers on eye-opening journeys to Death Valley, Hawaii, and Las Vegas, “the most extreme and allegorical of American settlements.”   First published in 1968, Slouching Towards Bethlehem has been heralded by the New York Times Book Review as “a rare display of some of the best prose written today in this country” and named to Time magazine’s list of the one hundred best and most influential nonfiction books. It is the definitive account of a terrifying and transformative decade in American history whose discordant reverberations continue to sound a half-century later.