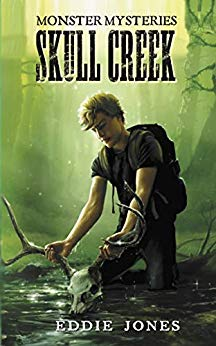 Nick Caden solves murder mysteries by watching police and detective shows. Can you identify who the vampire killer is before Nick?In Transylvania, North Carolina Nick Caden finds a murder victim with fangs, bite marks and a stake driven through its heart. There are no such things as vampires ... are there?Awards for the Monster Mysteries seriesWinner of the Selah award for tween / teen mystery seriesINSPY Award nominee (runner up)Moonbeam Children's Book Award nominee (runner up -- tagged out at third :)After solving the ghost story murder at Deadwood Canyon, Nick lands a job as a roving reporter for The Cool Ghoul Gazette, an app the covers paranormal events and supernatural disturbances. When the editor sends Nick to investigate a murder in Transylvania, North Carolina, the young super sleuth finds a corpse with fangs, bite marks and a stake driven through its heart. If Nick proves vampires are real, his job as an investigative journalist is set for life! But once he begins to peel back the clues surrounding the murder Nick finds his new job is not only dangerous but could suck the life out of him.I wrote the 'Murder Mysteries' series with boys in mind," says author Eddie Jones. "The 'Murder Mysteries' books are short murder mysteries with a spiritual supernatural element. Dead Man's Hand addresses the myth of ghosts. Skull Creek Stakeout addresses the myth of vampires. (In case you're wondering, the myth that a person could drink blood and live forever began in the Upper Room when Jesus offered his blood and body to his disciples. Obviously his words have since been distorted and taken out of context.) Dead Low Tide addresses the rumor that the dead can rise from the grave and walk around like zombies. Rumor of a Werewolf deals with the shapeshifting mythology that portrays humans turning into animals (Book of Daniel)."Whoever eats my flesh and drinks my blood has eternal life. I will raise them up at the last day." Jesus ~ the BiblePraise for the Monster Mysteries series"This series has the same longevity and wholesome quality as The Hardy Boys and Nancy Drew but the author writes for today's youth." ~ Amazon review"I enjoyed reading this fun suspense adventure. Great book for middle school and teen boys and girls will enjoy it, too!" ~ Amazon review"Overall the book was pretty good and I would think it would be for ages nine and up." ~ Amazon review"I was guessing until the end of the book. I did not know who it was. I think young adults will enjoy this book." ~ Amazon reviewThe Monster Mysteries series contains no; sexual dialogue or situations, violence, or strong language. While this murder mystery series discusses things like ghosts, vampires, and zombies, it does so in a factual way.