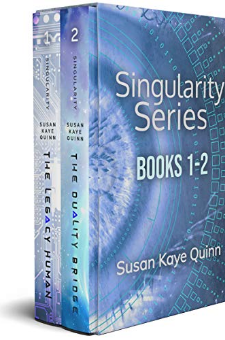 Limited Time Box Set of Books 1 & 2 in the Singularity Series. Contains The Legacy Human (Singularity Series 1) and The Duality Bridge (Singularity Series 2):The Legacy HumanWhat would you give to live forever? Elijah Brighton wants to become an ascender—a post-Singularity human/machine hybrid—after all, they’re smarter, more enlightened, more compassionate, and above all, achingly beautiful. But Eli is a legacy human, preserved and cherished for his unaltered genetic code, just like the rainforest he paints. When a fugue state possesses him and creates great art, Eli miraculously lands a sponsor for the creative Olympics. If he could just master the fugue, he could take the gold and win the right to ascend, bringing everything he’s yearned for within reach… including his beautiful ascender patron. But once Eli arrives at the Games, he finds the ascenders are playing games of their own. Everything he knows about the ascenders and the legacies they keep starts to unravel… until he’s running for his life and wondering who he truly is.The Legacy Human is the first in a philosophical HopePunk sci-fi series that explores the intersection of mind, body, and soul in a post-Singularity world.The Duality BridgeWhat does it mean to be human? Elijah Brighton is the face of the Human Resistance Movement. He’s the Olympic-level painter who refused an offer of immortality from the ascenders—the human/machine hybrids who run the world—in solidarity with the legacy humans who will never get a chance to live forever.Too bad it’s all a complicated web of lies.Worse, Eli’s not even entirely human. Few know about the ascenders’ genetic experiments that left him… different. Fewer know about the unearthly fugue state that creates his transcendent art—as well as a bridge that lets him speak to the dead. But the Resistance is the one place he can hide from the ascender who knows everything the fugue can do. Because if Marcus finds him, he’ll either use Eli for his own nefarious purposes… or destroy him once and for all.The Duality Bridge is the second novel in a philosophical HopePunk sci-fi series that explores the intersection of mind, body, and soul in a post-Singularity world.