Simon’s Cat: Off to the Vet 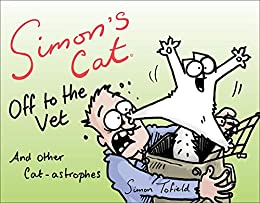 A hilarious take on every cat’s worst nightmare. “Guaranteed laugh out loud material . . . Simon’s cat is certainly the Snoopy of the cat world.”—Chicago Tribune

In the last five years, Simon’s Cat has become a global phenomenon. Star of thirty-nine films, which have been watched over 500 million times, and winner of a dozen major industry awards, Simon’s Cat has captured the hearts of a worldwide audience. In this book we see Simon’s Cat face any feline’s most dreaded scenario—he’s off to the vet. And he’s not at all happy about it.
Sharing its theme with the first-ever full-color Simon’s Cat feature animation, funded by a record-breaking Indiegogo campaign and released alongside the book, Simon’s Cat Off to the Vet . . . and Other Cat-astrophes is packed with over 240 pages of hilarious new gags and adventures featuring our favorite furry friend and his companions—both old and new.
Says Tofield: “Taking my naughty cat to the vet is one of the most requested film ideas from our fans. It was because of this that I started work on a new film and book based on the crazy situations that arise during these trips! A visit to the vet can be quite a stressful time in real life for both cats and their owners, however my goal is to bring out the comedy, and introduce a cast of extra characters for Simon’s Cat to meet, as he gets his claws into his new surroundings!”
“A sweet, humorous look at feline behavior from an author with a thorough understanding of this subject matter.”—Examiner.com