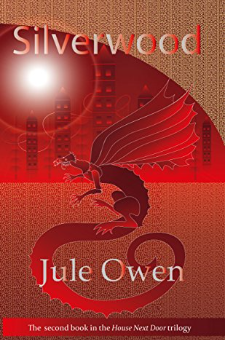 Silverwood is the second book in a mind-twisting new YA dystopian sci-fi time travel series Sequel to The Boy Who Fell from the SkyA boy hacks into his own future to try to save his mother from a mysterious virus.When Mathew Erlang’s mother becomes seriously ill, he’ll do anything he can to save her and he knows his future self would too. Alone in an England afflicted by extreme weather, biological warfare and civil war, Mathew needs to find his older self before Lestrange catches up with him and takes him back to his own time.??? Author InterviewQ: This is the second book in the series. Will there be any more?The Boy Who Fell from the Sky is part of the House Next Door trilogy, a series of three dystopian science fiction novels. Silverwood, which is the next is the series is already available. The third and final part, The Moon at Noon will be out in December 2015. Look out for the box-set in early 2016. Q: Does the world really need any more teen dystopia?Absolutely. Personally, I can’t get enough of them. What I love about dystopian science fiction is it allows you to build worlds and explore ideas on a scale that it’s difficult to do in realist fiction. But I’m hoping Silverwood and the other novels in the House Next Door trilogy offer a tiny bit of a different spin on the genre. This story is set in our own world. It starts in 2055, forty years from now, so the world is recognisable, but there are many differences in terms of everyday technology, plus climate change has already really started to kick in. When the novel opens, London has been flooded, the underground is under water, people have lost their homes. But this is also time travel fiction, so you also get to see what the world will look like in four hundred years time. If the scientists are right about climate change, then Siberia could be a tropical jungle by then. Q: Where do you get your ideas from? About ten years ago, I started reading The New Scientist and around the same time I came across a book by a theoretical physicist called Michio Kaku. He writes these fun books, trying to make science accessible to people by being playful. He does things like try to work out whether you can really make a light sabre or an invisibility cloak. I became fascinated by all these ideas and by the incredible possibilities of science and technology. We’re living through this huge explosion in technological innovation. It will transform many people’s lives for the better. But it also has its dark side. And, of course, then there’s climate change. I started reading avidly and widely about all these things. I built a timeline of what the various sources were saying may happen. I wanted to imagine what it would be like to live in the future, so I decided to write time travel fiction. I list all my sources on my website, if you want to find out more. Q: Don’t you worry you’ll get the future wrong?I write about this on my blog. It is impossible to predict the future (unless you have been there an come back like Mathew). Although some of the best augers have been science fiction writers and for every silly prediction they have made, there’s an uncannily accurate one.