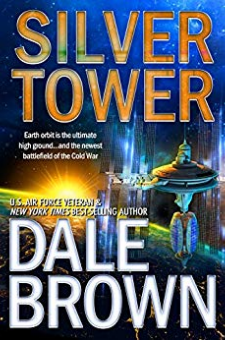 Armstrong Space Station (nicknamed the Silver Tower because of its highly reflective anti-laser coating) is the world's first military station in Earth orbit, a combination of the Skylab project and the fledgling International Space Station. It is the brightest object in the sky besides the Sun and Moon and can sometimes be seen during the day. Originally designed as an orbiting laboratory and engineering facility for classified military projects such as advanced communications and sensors, its newest project, designed by physicist and engineer Dr. Ann Page, is called Skybolt: a megawatt-class laser. Combined with Silver Tower's advanced sensors, once experiments are completed it will be capable of engaging targets several hundred miles in all directions.The Soviet Union claims Skybolt is a violation of the Outer Space Treaty, which forbids weapons of mass destruction on the Moon or in Earth orbit. The station's commander, Brigadier-General Jason Saint-Michael, insists that Skybolt is not a weapon at all but a technology demonstrator.But the Soviet Union isn't buying that excuse for a moment, and they activate an experimental project of their own: the Elektron spaceplane, capable of carrying offensive and defensive weapons. The arms race has moved to Earth orbit…and it's becoming deadlier by the moment. About the Author:Dale Brown is a superstar best-selling military techno-thriller author. He is considered the Tom Clancy of the Air Force and was one of the first modern techno-thriller authors. He has published 29 novels, most of which star Patrick McLanahan. He has also published 14 novels of the "Dreamland" and "Puppet Master" series along with Jim DeFelice. He is a private pilot and a major in the Civil Air Patrol, the civilian volunteer arm of the U.S. Air Force. He is also a volunteer pilot for Angel Flight West, a group that donates their time and aircraft to fly needy medical patients for treatment. He is a veteran of the U.S. Air Force and amassed over two thousand hours in the B-52G Stratofortress heavy bomber and the FB-111A medium supersonic bomber.