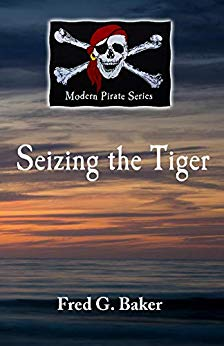 Seizing the TigerIt’s 1996 and Alex the Pirate hates having his smuggled goods ripped off on the high seas. Colonel Le, another pirate, got the drop on him and he is vastly outgunned in his wooden-hulled tongkang in the middle of the Gulf of Thailand. Le smirks as he steals Alex’s valuable cargo and powers away to leave Alex and crew drifting on their damaged craft at sea. Alex and his friend Diego know that vengeance is a dish best served cold. Le will pay for his treachery—the hard way. And maybe they will seize the cutthroat’s prize boat—the one they call the Tiger.The first of a collection of stories about Alex the Pirate and his savvy crew of rogues and thieves. They are modern pirates who love fast boats and expensive yachts, and also share a passion for treasure hunting. Alex and Diego, his second in command, scout the South China Sea and Caribbean for worthy ships to liberate from their owners. Each story reveals more about the pirate, his crew, their adventures, and secret missions.