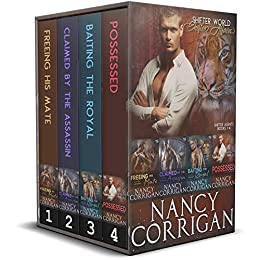 "This book kept me awake all night reading it!"Freeing his MateNever lead a widowed shifter cop to his true mate then tell him he can't have her.Mya
One night, I was stolen from my human life and thrust into the shifter world. With no rights among these primal males, I'm expected to submit to their will. But I only want Rick—the rugged, tattooed cop who can touch my soul and tame my wolf and... free me.
One thing stands in our way—the beast who kidnapped me would rather kill me than let me go.Rick
A century ago, I lost my family. While on the hunt for a killer, I found my future. Mya's my true mate. She's my gift from the gods...the one woman I'm supposed to love and treasure forever.
And the rogue wolf shifter who took her from me will die.
Even if I have to break the law I've sworn to uphold to steal her back. Nothing keeps a shifter from his one true mate.Claimed by the AssassinA shy waitress and an ancient, shapeshifting assassin with a bounty on his head… A match made in heaven?Sara
It was supposed to be a simple favor. Instead of helping out the sexy, aloof bouncer at my bar, I’ve narrowly escaped death at the hands of a murdering shifter and inadvertently rescued Ilan’s nephew in the process. The things a woman has to do to get a guy’s attention these days…Ilan
For years, I kept my innocent human true mate safe from me and the dangerous world I live in. Then on the night I planned to skip town, Sara lands in the middle of a botched assassination attempt. Now, I can’t let her go. She’s a target. So is my infant nephew. And the killers who came after my family should be afraid.
Very afraid.
I’m not called an Angel of Death for nothing.Baiting the RoyalA murder case where the stakes are personal…in more ways than one.Lyla
As a coroner, I give a voice to the voiceless. But the latest body on my slab raises questions someone doesn’t want me to answer. With my sister’s attacker back in town, I need to uncover the truth. Any way I can get it. Even if that means partnering up with Uri, a Royal feline shifter from the Alexander pride and a by-the-book cop who’d rather keep me safe in my lab…or his bedroom.Uri
Rules are made for a reason. But nothing in the official Shifter Affairs handbook covers what to do when you’re forced to partner up with your true mate. Especially when Lyla has a penchant for fighting for the underdog and finding herself in dangerous situations. But with a serial killer on the loose and the body count rising and hitting closer to home, only one rule matters.
Nobody threatens a shifter’s mate and lives.PossessedHe thinks we’re destined to be together. I think he’s crazy... Or maybe that's me.Zoe
I’m called the “beloved human” of Kade, the alluring leader of the Royal Alexander pride. Its members consider me his possession. I avoid thinking too hard about what that means by teasing him mercilessly. Besides, I have other worries. My nightmares are back, stronger than ever, and they’re starting to bleed into the real world. To make them stop, I have to discover the truth behind the attack that cost me my baby and my fiancé. Their deaths demand justice. And I want revenge.Kade
Ever since I healed Zoe, she’s been my responsibility in the group to handle—and to control. I never asked to claim her, and I didn’t want to. Until now. She’s the one. My mate. And the timing couldn’t be worse. Other shifters are making bets on how soon I’ll lose my title, and fears over a prophesy have made our group a target. But I’ll do anything to protect Zoe, to ensure our pride is a safe place for the future we could have together. All that’s left is to convince her—and to prevent my enemies from claiming what’s mine.