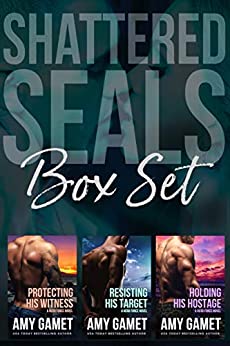 The Shattered SEALs of HERO Force New York each have something to prove... to themselves. Box set includes the first three books of the bestselling series: Protecting his Witness, Resisting his Target, and Holding his Hostage.

Book One: Protecting his Witness

Scientist Summer Daniels is a witness to a bombing by an ex-employee who now wants her dead. Luke “Wiseman” Arroyo is a broken Navy SEAL on the verge of quitting HERO Force who must now stay and protect her. They'll work together to find a rare element stolen during the attack, but Luke’s hiding a bombshell secret that could detonate a lot more than the explosive chemistry between them.

She was offered the chance of a lifetime... literally. Pregnant Jackie Desjardins struck a deal with the man who didn’t have the heart to kill her—he would let her live if she faked her death and never returned. But when the scales of power tip unexpectedly, that deal expires, putting Jackie and her young daughter in the crosshairs of evil.

He must protect the woman who betrayed him... Sloan Dvorak came home from basic training to find his girlfriend married to another man. He went on to become a Navy SEAL and did his best to forget her, proudly serving his country until he lost his arm in Kandahar. Now he's a member of HERO Force New York, wondering if one arm is enough to truly fight for anyone.

Joanne Regan had been separated from her husband for a year when he died in a brutal homicide. But before they could lower his body into the ground, the mob demands she pay up on her husband's debt - millions of dollars she doesn't know anything about. Now she's on the run, desperate for help with no one to turn to - a sympathy card from Sloan's mother guiding her like a beacon in the night.

Joanne shows up on Sloan's doorstep with her three kids, looking for his mother with the mob hot on her tail. Sloan is thrown into a dangerous spiral, drawing him closer and closer to the one woman he desperately needs to avoid, determined to save her and the children from a danger unlike any he's ever known.