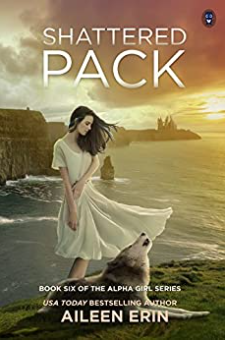 From USA Today Bestselling Author Aileen Erin Meredith Molloney never thought she’d find a mate, let alone someone like Donovan Murry—one of the most powerful Alpha werewolves alive. Now that she’s no longer cursed and the evil Luciana Alvarez has been taken care of, she thinks life will finally settle down. Boy, she has never been so wrong.In the middle of the night, Donovan gets a call telling him that his pack has gone to pieces. The news that his second in command has been found brutally murdered has Donovan packing his bags for Ireland, but the last thing Meredith wants to do is go with him. Cosette just warned her that the Irish pack isn't so happy about Donovan's choice in mates.But Meredith’s never let a few angry wolves stop her, and she’s not about to start now. She’s faced down much worse the past few months. But when she gets there, she finds that it’s not just an angry pack that stands in the way between her and her Full Moon Ceremony with Donovan.Meredith is thrust into a deadly game of pack politics, one a fey beast has happily joined. When the magic and dust settle, she knows she’ll either have everything that she wants or lose it all."There was lots of everything we love in these stories from romance (Can I say enough how cute Meredith and Donovan are together) to pack politics, mystery, suspense and tons of action." - Functioning Insanity“I love this series. I just think that it keeps getting better and better.” — A Reader Lives A Thousand Lives"I have enjoyed every minute of this book and will read what ever Aileen Erin wants to write at this point." - Smada's Book SmackIt's time to binge the complete Alpha Girls series!Book 1: Becoming AlphaBook 2: Avoiding AlphaBook 3: Alpha DividedBook 4: BrujaBook 5: Alpha UnleashedBook 6: Shattered PackBook 7: Being AlphaBook 8: Lunar CourtBook 9: Alpha ErasedGet ready for Off Planet, the biggest and boldest adventure yet from the mind of Aileen Erin. It's perfect for fans of Suzanne Collins' The Hunger Games, Claudia Gray's Defy the Stars, and Maura Milan's Ignite the Stars!