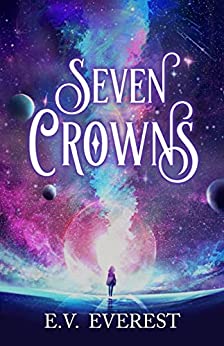 A crown is dangerous. A crown split seven ways is deadly.Sixteen-year-old Ana is far from royalty. She’s a foster kid with a dead mom and a deadbeat dad. The only thing she wants is to escape—her hometown and her grief.Ana’s plans are derailed when a dangerous family secret is revealed. She is the sole heir to a fallen dynasty on a world where seven families share the crown. Her family was murdered one by one, leaving six families to rule. Now, someone knows Ana’s location. With assassins closing in, Ana’s life and the crown are at stake.With the help of a handsome hobo, she escapes to the place where it all began—a faraway world where magic and technology coexist. Ana must navigate a tangled web of friends and foes to unmask her would-be assassin before it's too late.Travel to a glittering, dangerous world with political alliances and ballgowns, perfect for fans of The Hunger Games and Cinder.★♥★SEVEN CROWNS is the first book in the Shadows & Starlight series.