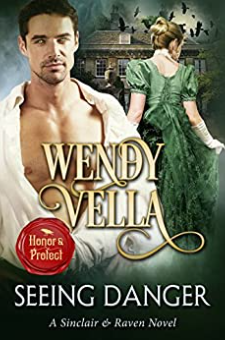 From USA Today Bestseller Wendy Vella comes an exciting Regency series about legend, love and destiny, with a hint of magic …Lord Devonshire Sinclair understands his family’s heightened senses are a result of a long ago pact between the Sinclairs and the powerful Raven family. To Honor and Protect is their creed. He has also accepted that no woman could live at his side and understand what he is capable of…until now.Miss Lilliana Braithwaite has always appeared a woman of little sense, with a tendency to dress like a color-blind field mouse. Dev had, for two years, ignored her until one night he finds her on the streets of London, attempting to rescue a child, and thereby hurling herself into danger. From that day forth everything between them changes, and in Lilly he finds the woman who could tame his heart. However, she does not appear convinced by that fact.With only a matter of months before she receives her inheritance Lilly is determined to hold her secrets close. No easy task when Lord Sinclair seems equally determined to meddle in her affairs. Lilly tries to repel him, but finds herself weakening as he rescues her from the fiend intent on disrupting her plans. Soon she can not walk away from Dev, but can she allow herself to trust him enough to give him her heart?BOOKS IN THE SINCLAIR & RAVEN SERIESSensing DangerSeeing DangerTouched By DangerScent of DangerVision Of DangerTempting DangerSeductive DangerGuarding Danger