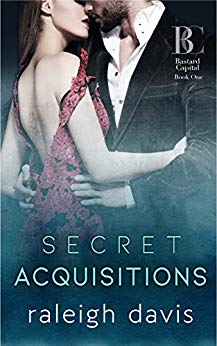 A sizzling standalone romance about a second chance with the billionaire who got away…January: I need a billionaire. Fast.When I stumble onto a tech giant’s plot to spy on everyone’s phones, I know my security company is only one who can stop them. But my little start up needs money. Lots of it.Enter Mark Taylor, the hottest venture capitalist in Silicon Valley. And the only billionaire I know on a personal level. And the guy I reluctantly turned down in college.I’m in his office and ready to beg… but he’s not the forgive and forget type.Mark: I never hear the word no. Not since I remade myself from a skinny nerd into the deal making playboy of Bastard Capital. January was the last woman to tell me no—and the one woman I can’t forget. She’s as enticing as ever, so I offer her a deal: I say yes to her in the boardroom and she says yes to me in the bedroom. A quick, scorching affair is exactly what I need to get her out of my system.But when a shadowy conspiracy threatens her company—and the privacy of everybody—all my protective instincts flare to life. And this quick affair is suddenly much deeper than we’d ever expected…Enter the world of Bastard Capital: Unrivaled men. Unimaginable wealth. Unlimited power. Books in the Bastard Capital SeriesSecret Acquisitions (Book One, Mark’s story)Unfinished Seductions (Book Two, Logan’s story)Competitive Instincts (Book Three, Finn’s story)Intimate Mergers (Book Four, Paul’s story)Hostile Attractions (Book Five, Elliot’s story)Private Disclosures (Book Six, Dev’s story)